“Language shapes the way we think, and determines what we think about.”
Benjamin Lee Whorf

Lotus Valley International School believes in fostering respect and tolerance towards all. It embodies cultural diversities through multilingualism and promotes awareness to preserve and protect languages which are the soul of our nation. 21st February is observed as the International Mother Language Day and gives us all an equal opportunity to build relationships across communities.

Apart from helping in giving children a definite shape and thought, mother-language helps them learn other languages easily which opens up a whole new world to them. In ‘Meri Bhasha Meri Pehchaan’ activity, our adorable Pre-nursery learners proudly shared greetings in their mother-tongue and with amusement watched a video of the different languages being spoken across the varied states of India. Grade Nursery learnt about new horizons and limitless prospects when the mentors stressed upon the importance of the day. The learners witnessed the vibrancy and beauty of other languages in ‘Hum Ek, Bhasha Anek’ where parents also came forward to share a few words in their native language and express the significance. Multilingualism was best understood and experienced in Grade Prep where the Meet and Greet sessions helped all perceive a whole new outlook and the learners used more than one language to greet the fellow mates. Sharing a song or a poem in another language was a step-up that built an enthusiastic urge to learn in all.

An educational video with greetings from the world encouraged our Grade I learners to experience the same. Post sharing some basic verbatim from their native language, their curiosities were finally attended to when they wrote and spoke greetings in five international languages. It appreciated their perspective to learning and took it to a whole new level.

Languages are an important aspect of one’s development and progress across boundaries, thus the increasing need to promote inclusivity and preservation of the same. With deep gratitude in their hearts for commemorating this day, our Grade II learners learnt to express ‘Thank you’ in varied languages and shared their views on the language they felt was most impactful.

The most basic conversation is struck with a ‘Hello!’ and that is what was used by our Grade III learners in different international languages to greet their friends as homage to this special day. the conclusion of the day saw the unconditional joy of the children to speak in their regional languages and express the confidence and comfort felt.

Let us all always celebrate this day with respect and solemnity promoting our unity despite the diversities and enhancing language-based education. 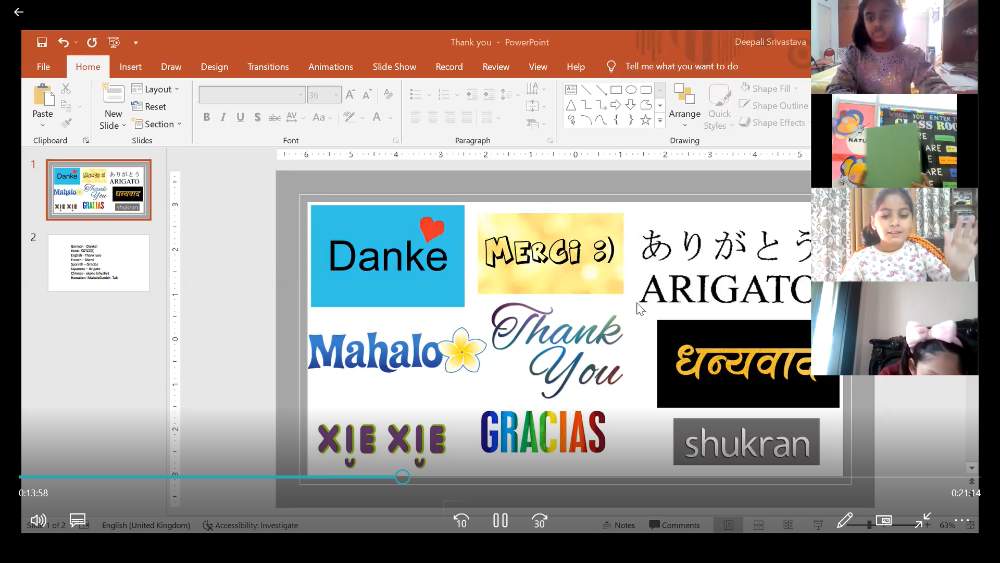